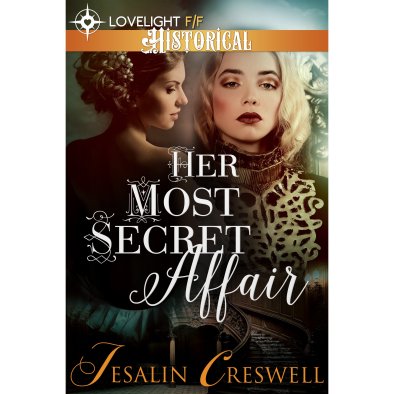 Valerie Wilde is the Madam of The Crimson Manor , a luxuriant brothel, retreated at the age of 31 she behaves more like a human resources recruiter, her girls leave the brothel to be some count’s kept woman and she needs to find a new girl instead of Molly, the first of her recruits. Valerie shares features like the need for love, the disbelief in it with Zola’s „Nana” and Dumas fils’s „Camille-Lady of the Camelias” , but she resides the brothel activity and yet she’s free, she’s not a kept woman, a courtesan of affairs that taunts with men’s richness or maybe hunted down by a disease and her attraction to women. 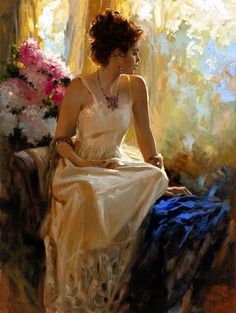 „Love…the word felt strange to her. All the life she’d known, she’d been amongst the women of a house, and a few men had almost claimed her affections in the many years since she began as a lady of the night. But each time a suitor drew close, she ran. The life they offered looked pale and shabby compared to the one she knew. To be kept in some pretty house with pocket money and a set of rules,to no longer hold her destiny: even if her grip was only as strong as the velvet oyster between her thighs, she would hold on.To her, love looked like a disappearance, a loss, and a sacrifice, but never for these men who offered it like some golden egg. It was only poor Valerie who would lose in the end. She simply chose not to play.”

Miranda Dashwood will be Valerie’s new recruit, she was born wealthy, but now she struggles to survive: her deceased father’s gambling debts have crippled the household. She had no experience in life nor love and she lost her virginity being fooled by one’s of her father’s friends. Now she needs to support her mother and her brothers and sisters by doing the world’s eldest job without the care of someone who can tell her and teach about life and love. She’s sensitive, innocent and has a secret desire for women, that she has never explored, yet still it has never left her thoughts.

„She did not seem worried by her situation, whatever the girls had said of her predicament. She was utterly defiant, and yet thoroughly polite, calm and resigned beneath. Eventually, when she was convinced her voice would not give her away, Valerie spoke.”

When she is looking for a new recruit, Valerie chooses to watch the new girl „at work”, she has some tentative and they happen outside Crimson Manor, yet Miranda had no place to take the customer’s at and Valerie agrees on her test happening in the house. She studies the new girl behind the wall and Miranda has no clue about it and somehow Valerie is certain that this woman has a gift for delivering pleasure : she will be someone special.

„Such blatant Sapphic desire bordered on predation. Even now, Valerie yearned to reach across the room and brush an errant flaxen curl from Miranda’s face and take her lips with her own, press this weeping angel close and bury her burning face in the shallow mounds of her breast. Something unspoken in that soft look of hers which sent chills down Valerie’s spine. Perhaps it was in the slight parting of the lips, the steady heaving of her corseted bosom, that gave her this impression, but Valerie thought Miranda may bestarting to like the notion of the house.” 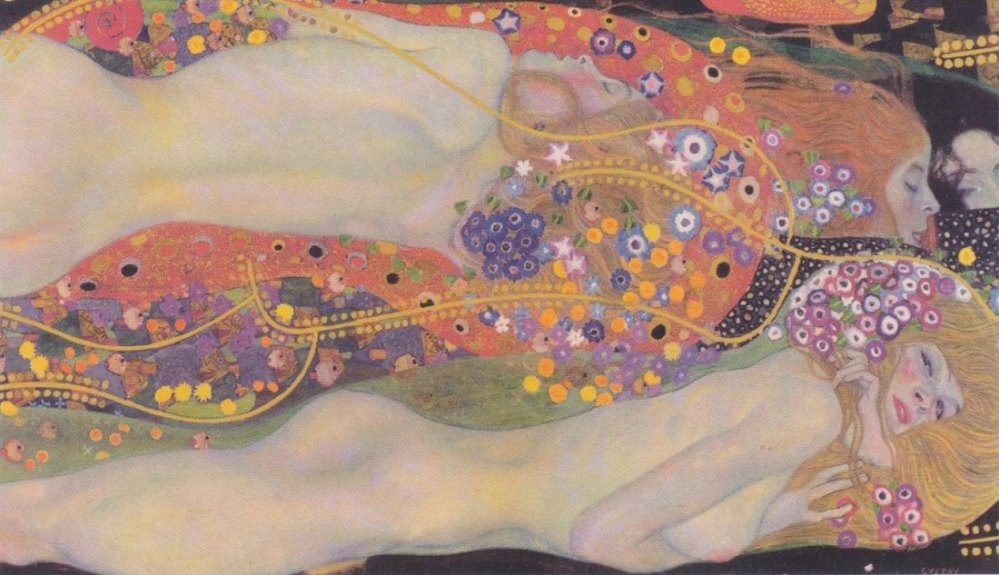 Miranda is introduced and she starts working, yet spends lots of time in Valerie’s company to understand the „rules of the house” and being taught best practice, although Valerie knows she doesn’t need to, because something in Miranda’s appareance, high class education, body posture and language are out of the ordinary and soon she becomes the favorite of the pleasure house.

“Valerie didn’t allow her smile to drop until she heard the door close behind the couple, and only then did she gasp for breath. Her tears fell thick across her heaving bosom, perhaps for the first time in her life as a whore.

“This former heiress and current toast of London’s pleasure-seeking men is as genteel as a marble angel, but a red-hot demon between the sheets.”

Valerie bore this praise and celebrity with grace in public, but behind closed doors and in solitude, she wept.”„Was she dreaming that this heavenly girl shivered a little when Valerie’s fingers drifted over her?   And here, men are lined up to give it to you,” and women… a voice whispered in Valerie’s head.

Truly, this exquisite girl was a demon sent to taunt her, or a nymph made real from fever, an opium dream in the flesh, sent to make her go mad.” 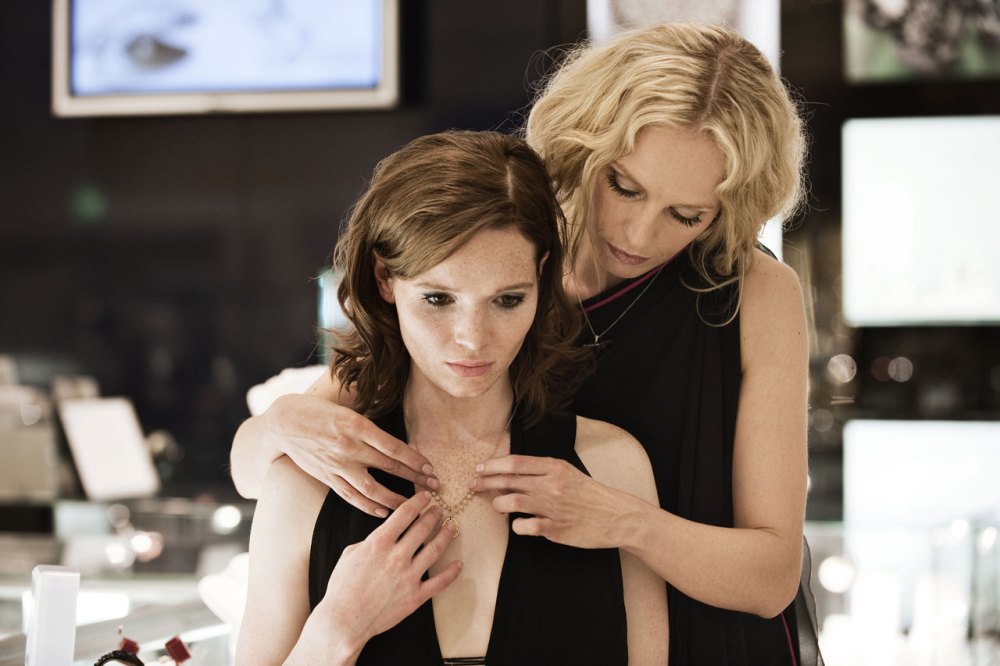 In secret, Valerie falls in love with her, her whole being is overwhelmed by this young girl’s allure and charm, with every dress she helps her put on, with every tear she swipes off, with every look and with every teaching touch, Valerie loves her more and suffers the girl’s not hers and that one day she will leave the house of pleasures for a place in a golden cage home of a count as a kept mistress.

„She had no way of knowing how a woman might yearn to touch her too, how the thought of her sweet face, twisted in love-making, could make another woman so slick, it almost pained her, so delirious in her senses that she feared not just her discovery, but herself. The sweet thing would have no idea. The shock could drive her from The Crimson and the arms of her loving new friends. It could force her to accept the first offer made to her, fleeing her doting madam and the hunger in her eyes, the desire on her breath… 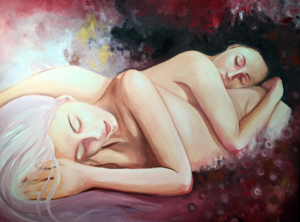 Her fingers trailed the perfumed water and dipped below the surface, tracing yet again the outline of her folds, which even under the water were wetter than their surroundings, a dense, throbbing heat calling to her wayward strokes and teasing, leading her to a bliss so sweet she cried out, and so fleeting, she wept.

Valerie nodded, and sat on the edge of her bed, refusing to allow herself to think of the thin layers of cloth between her and Miranda, about the throbbing which returned to her heart, growing faint at the smell of the girl in her room whom she must not touch… must never touch.”

I loved Miranda’s confession and their lovemaking was beautiful, yet the confession felt obvious, it could have happened somewhere else and the moments afterwards in the mansion could have been somehow twisted with a twirl and with funny moments perhaps.

I want to be here, with you,” she said finally, and before Valerie could respond, she was gone.

What fresh hell was this that placed the angel so close to her, and taunted her with the very words she so longed to hear her sweet lips say?

Every evening, when the doors closed and the men were gone, I dreamed of you. I dreamed of you here in this bed, looking as you do now. But instead of staring, aghast and inconsolable, you took me in your arms and smothered me with kisses. I fear, in these short weeks, I have come quite undone. What the other girls must think of me, panting and lusting after our madam like a wretched bitch in heat, every mention of your name like music to me. They must have noticed. They must see how I long for you.

The depravity of this moment suddenly struck Valerie, but she couldn’t help the flailing of her limbs and the rocking pleasure she found, wrapped tight in Miranda’s firm limbs.

“Do you remember how you laced me into my first whore’s dress?” she whispered from between Valerie’s legs. “Oh, how I wanted you to take me then. How wet I was when my first client took me.

He thought it was for him but oh… oh…” her muttering, while she lapped hungrily at Valerie’s cunnie, teasing out for one orgasm, then two, then three.

The dazzling young lady caught her lover’s eye, and this time the words between them were unmistakeable to both parties. They smothered their smiles in cups of tea and buttered their thick slices of toast.

Love was hungry work, they found. And their fingers laced together beneath the breakfast table, never to be parted.As bouquets from their admirers clogged their door, the women laughed together. Some talked about the pair with hushed voices and condemning looks, but their stolen kisses were too sweet to leave behind.”

It was a well written romance novel with wonderful revealings of places, strong characters, the plot is sweet and reminds me of Cristina and Isabel from „The land of the wolves” yet I missed more details about Miranda’s inner feelings discovered to the reader and some twist of the plot that could make the writer’s talent even more exquisite.