“In the distance there is light” by Harper Bliss stunned me, especially when listening to the audiobook narrated by Charlotte North, which made me love it even more.

It took me two days to read and two weeks to sit down and write this review as the book really deserves it.

It’s a first person read and it has one huge and enough cliché with a small twist.

This is an age gap lesbian romance involving the girlfriend and the stepmother of a man they have both dearly loved.

If you can’t get past the fact that Dolores is Sophie’s dead partner’s stepmom, stop reading now.

That got me confused a bit, too, when starting to read.

Then, it just absorbed me like a soft feather pillow on the top of a speed roller coaster.

After a few pages, I just felt like Sophie and had a quick crush on Dolores, already.

I think it’s important that the novel it’s a first person read, as a grief such as Sophie’s and Dolores’s can be described only speaking at first person.

After losing her boyfriend, Sophie seems lost and at a total loss, in an emotional chaos. She is a complex character, though.

Imagine you have just lost the man that you love, the one that got you on the right track when you needed it most, without expecting anything in return. That was Ian. He was the love of her life, her rock and her best friend. Sophie is struck by pain and loss, she can’t imagine a life without Ian. She isn’t very close to her family, she has one best friend, but staying with him doesn’t help. She can’t hold her grip, as she can’t live in Ian’s apartment, she can’t go to work anymore and she even feels she hasn’t done enough to stop Ian that morning to go to work on his bike.

To summarize in one sentence: Sophie’s life is over without Ian.

Who can possibly understand such grief or worse, if you ask me and who could have loved Ian more? The answer is: his stepmother, Dolores.

Dolores is the most complex character of the narrative. She is a gallery owner and has developed a wonderful career among the years.

She has also found happiness in her love life: Ian’s mother, Angela.

She has loved both Angela and Ian dearly and it is unfair that during some years she has lost them both. I believe her pain is far more abrupt and full of regrets than of any other character in this book. I can only imagine that, as we know Dolores from Sophie’s perspective.

After Ian’s death, Dolores has none to rely on, but on some friends.

She couldn’t abandon the house where she and Angela and together with youn Ian have lived and now they’re both gone and she’s out of compass, too.

She has always buried herself into her work, open a new gallery, and face her sorrow somehow. She is a power character, indeed.

Yet, at this point, I find her vulnerable and she feels Sophie’s struggle and her raw emotions are at their highest leves. She wants to help Sophie to get on her feet again. But, she herself needs comfort, company and someone to share the pain, the lonely nights with. Those are her main reasons to ask Sophie to live with her.

Sophie has always needed the affections of a mother, as her own has spent few days with her as a child and teenager and she needs Dolores’ experience in facing and overcoming pain and sorrow.

And Dolores has always liked Sophie since the moment Ian has introduced them.

Day after day, Sophie enjoys Dolores attentions to her: a morning breakfast, their talks, their evenings watching tv and the need to sleep next to someone dear. Everything happens with small steps and Dolores fearing loneliness, loves Sophie’s company and loves taking care of her. 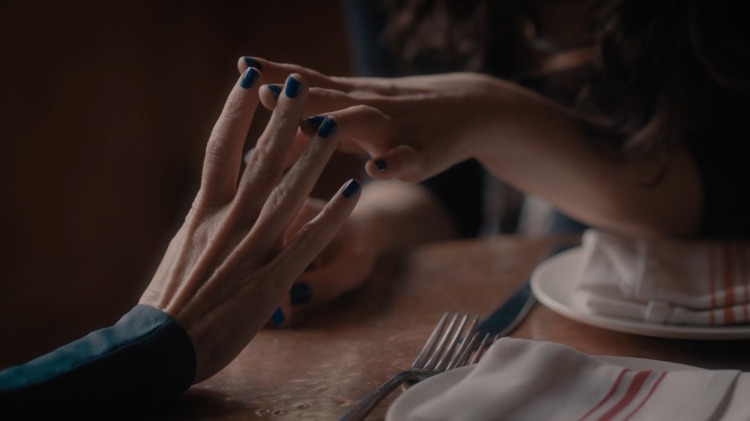 Sophie watches Dolores open a new gallery and even helps her doing that, she sees the woman in Dolores at the night of the great opening. She understood that Dolores and Angela were a lesbian couple, so she knows Dolores is a lesbian. But after knowing her as Ian’s stepmother, then taking care of her more than her own mother ever did, and then seeing the woman she really is, made Sophie understand the complex persona Dolores is.

And then, Sophie kisses Dolores.

That is one of a helluva turning point.

And then they have sex.

Yet, she senses more. But doesn’t want to put this burden on Sophie’s shoulders.

When Dolores sees that Sophie won’t get back on her own feet again, not just because Ian has left her the apartment and a good amount of money in the accounts, but because of her care, so she decides and tells Sophie she should do something for herself, by herself and that she needs to move on.

Sophie understands to move out, but really suffers because of their depart and feels lonely, the pain is still there, yet something new too and that something has to do with Dolores.

She went back to her apartment and starts life on her own, yet she knows she misses Dolores and she needs to explore those new feelings, as they are the only ones that make her feel alive and not thinking of Ian.

Even to her own surprise, she admits that she wants Dolores, yes her dead partner’s stepmother, 15 years her senior, big clichés, she understands how this relationship will be seen in the eyes of the world, in the eyes of her friends, of Dolores’s friends, of her own mother, but she wants to do it.

I admire Sophie’s courage to face the world and how she’d overcome pain and found her way next to Dolores.

It’s her way to adulthood, her evolution as a woman and as a grieving human being.

Although, Dolores is a power lesbian, she doesn’t take control of the situation, ever, they’re all Sophie’s choices.

I loved that about the plot.

I loved the many clichés and turning points.

I loved the humanity in this book.

I admired the courage, the strength and the raw emotions of the main characters and how they went from grief to love.

I would also recomend the audio book narrated by Charlotte North.

Excerpt from the book: