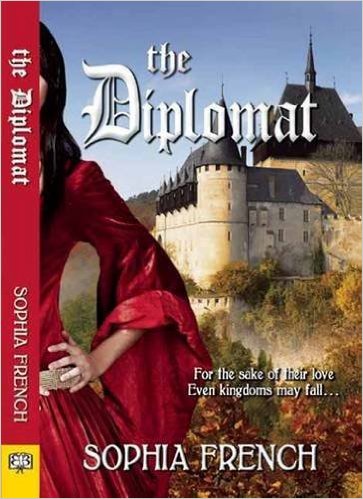 “I’ve been writing a song about a diplomat who falls in love with an enchantress.”

Jalaya touched her hand to her chest and sang: “Her eyes were lit with lunar fire, her abductor’s heart was set aflame; theirs was a love that would not tire, two hearts that felt and beat the same…””

“It’s a novel of deliberately diverse bodies and femminities, starting with the lead romantic pair: a mature, mixed-race woman who takes satisfaction in wearing scandalous trousers, and a full-figured enchantress who revels in the skimpy attire that fantasy artists usually reserve for elfin maidens.”-the authors says.

I believe it’s an amazing romance happening in an imaginary world, in foreign lands, I could imagine it like during the reign of Ghingis Khan or the great emperors of Mesopotamia or Asiria. A diplomat supposed to arrange a marriage between her emperor and a foreign princess, yet the envoye falls for the princess, oh, and she’s a woman. I enjoyed the plot, the twists, the separate “stages” : one in the kingdom of the princess, Danosha, and one in Arann, a cosmopolite ancient metropole, the envoye’s place. The other obscure characters : a paid assassin, a man of the stage, a color creator, friends and enemies and lovers.

“My name is Remela. I’m an emissary from Emperor Ormun of the Pale Plains, Heir to the Wide Realms, Lord Master of the City States of Urandal, King of the Lastar, Lord of Goronba and so on. Please don’t make me say the rest.”

Rema is the royal envoye determined to manage a successful marriage between her master, Emperor Ormun, and a young princess of neighboring Danosha. The Danoshans need protection and Ormun wants their unwavering loyalty. The sanctity of a royal wedding would resolve many diplomatic issues. She believes it will be a piece of cake as this marriage will help the people to embrace a better life without wars and the princess will be the emperor’s wife, a title that many would desire…yet she hasn’t met Elise.

Before they could reach the stairs, a young woman emerged from the stairwell. Her pale, rounded face was obscured by a tangle of waist-length black hair. Behind the untidy locks, her eyes shone an intense silver-grey, and her full lips were turned in a pout. The cut of her red dress exposed one of her shoulders. As she walked toward Rema and Yorin, the scarlet fabric tightened against the curve of her ample thigh, and Rema’s pulse stirred.

“Elise,” said Yorin, nodding to the arrival. “This is Remela, the Emperor’s emissary.”

“She closed her eyes and focused on her breathing, and her thoughts drifted to Elise. A provincial pit like Danosha was no place for an assertive, ambitious woman, especially one attracted to her own sex. There were few things more despicable than these cruel eastern kingdoms, some of which even imposed death upon women for loving one another. What relief was in sight for this defiant princess, for whom even loneliness would be better than a life under Ormun’s cruelty.”

“You should know that, uh, my sister…” Loric ran his hands through his hair. “She’s not like most women. She’ll find you very attractive. She might, um, she might…express certain desires or intentions. If that makes you uncomfortable, you should probably find an excuse not to attend.”

“I think I can handle her,” said Rema, hiding her amusement. “Have a good night, Loric.”

“Their eyes met. There was a familiar heat in that silver gaze, and a tangled mixture of amusement, pity and pleasure swept through Rema’s body. Was Elise attracted to both sexes or only interested in women? In either case, how unfortunate for her that she had been born in Danosha, where the laws and customs did everything they could to punish women who followed their hearts.

Her thoughts crept, once again, to Elise. The barely-veiled desire in Elise’s eyes had made clear Rema’s mission was to be an especially painful one. At the court of Arann, she was known as a relentless advocate for the vulnerable: slaves, prostitutes, beggars, the crippled and uniquely-minded, those who refused the sex given at their birth, and, of course, people like herself and Elise—women constituted to love women, men constituted to love men. As a Danoshan, Elise would have been told throughout her life that her way of loving was some monstrous sin. If only Rema were free to demonstrate the beautiful truth that women could love one another—with as much passion and lust as they dared—and day would continue to burn into night, as it had always done.“

The truth, that Rema and Elise fall one for another, Elise’s parents don’t want lose their daughter to be the wife of a brutal emperor, their grief to have a son  like Calan as cruel as who has such power over his father, the king. Yet, Elise’s only chance to be free and love a woman like Rema freely is to go the way of becoming Ormun’s wife. And she trusts Rema by her side. They leave on foreign waters and Elsie knows now she can only love Rema and her free spirit and her will cannot be broken and she does a foolish mistake in front of the emperor and she’s punished to be beaten, yet Rema takes the punishment for her.

“Sometimes we must lay down in darkness if we hope to see the dawn,” said Rema, her voice soft. “But you won’t be alone, Elsie.”

“In Arann, Elise could have lived and loved as she willed, and the great city would never have paused in judgment. She and Rema could have been lovers, perhaps even living together in Rema’s mansion by the sea. It was impossible not to envision returning home to find Elise waiting in the front archway, her eyes heated with a consort’s welcome, her lips relaxed in a smile, the seductive curves of her body silhouetted beneath loose silk…It was madness, yet Rema could think of no way to escape it.”

“Love is a feeling. It’s not about knowing. This is one enchantment I can’t break, and I’m glad. I want to live beneath your spell, even if it destroys me. You’re my disaster, my damnation…my diplomat.”

“Strike me, then,” said Rema. “Demonstrate your impotence. You know that you can’t outwit me, you’re frightened of the influence I wield, and so you’d succumb to your cowardice and try to subdue me with your fists. It would prove nothing except that in place of wit you have empty brutality, like any other dumb and sullen beast.”

“I’m going to free you. I’ll rescue you from hating yourself for the things you have to do in his name. Your father was right. There’s no power greater than virtue, and I’ll prove it to you.”

Rema pressed her cheek against Elise’s fragrant hair. She wanted to undress her, to kiss her and love her. Instead, she held her for as long as she dared, this woman who was both her captive and the captor of her heart.

“Your books have taught you well. But they’re a gentle sect, rejecting violence and even the consumption of meat, and Tolos is not half-man, half-woman, but neither of the two. Like several of Arann’s philosophers, Tolosians reject that there are only two sexes, claiming that every person has a unique sex of their own.”

“What a beautiful idea. Our priests would be impatient to burn them all alive.”

The end is breathtaking, as the emperor faces a huge surprise and all their friends and enemies are witnesses : Muhan, the color merchant or Banon, the assasin. Even if, Rema has a girlfriend back home it’s not serious and the relationship between the three women becomes a big friendship and Rema and Elsie’s love create a a breath to be set free for women who love women throughout the empire.

“Because I’ve realized my fear of him is nothing beside my fear of losing you.” Rema laid her fingers against Elise’s damp cheek. “Elise Danarian, our breath is one breath. Our heart is one heart. Our life is one life.

That’s the joy of being a traveler: every day your eyes open a little wider.”

There is a secret written in the eyes and lips of a woman who needs me, and when I find her I will croon a song of love that will wind its way through the heart of the world.”

I loved the love letters and notes between the lovers :

“Sweetest R: You are beautiful and witty and I miss you already. Remember, there’s trouble on the way. Be a wary little diplomat and don’t forget to wear your present! Forever, E.“

“You are cruel. When you blew me that kiss in the banquet hall, I dared to hope…but then you abandoned me to Calan and my father. Despite everything, I still want so badly to believe that you’re here to save me. You’re a torment, R, an intoxicating torment. I hate you. Helplessly yours, E.”

“Beneath the wing of despair,

I drift, feathered with tears.

Shadow wreathes my every bone,

But then I fracture, falling broken,

And the darkness breaks with me.

I feel that I am light again

And know that I am saved.

Now drift to me, twin of my heart,

Toward this certain bliss.

For love has lain a path for you,

And you will find me waiting.”

“Her love has held my grief at bay,

And now she sets me free,

To drift upon my lonely way,

But in my breast still burns the gift

Of her sweet mystery;

My lips will always feel her kiss,

Her heart remains with me.”