“When I was growing up my parents fought a lot so I spent a lot of time at my best friend’s house. Her family was very evangelical and I remember her dad coming into the room and telling us it was ‘not right and not normal’ for us to be sleeping so close together. When her mom told us we had to stop spending too much time together it broke my heart. They would tell us that homosexuality is unnatural and sinful and even though I’m not a Christian I feel like their words got engrained inside of me for quite a number of years because I felt a deep sense of shame about myself for being attracted to women. As I got older I had other friends who were straight, or mostly straight, and we often found ourselves sleeping in the same bed. On multiple occasions I was told by them to ‘give them some more space.’ That would always hurt a lot. Looking back, I understand now that I had crushes on all these friends, but at the time I was deeply embarrassed to admit it and fearful of destroying my friendships if I expressed any hint of attraction.

When I turned 22 I started a four year relationship with a man. I thought I was too much of a man-hater and that I needed to give men a chance. Four awkward and turbulent years later, I finally accepted that men and I were simply not going to work together.
The first time I fell in love with a woman, the entire world suddenly made more sense. A sense of beauty and meaning overwhelmed me in our short yet forever life-changing relationship. I finally understood why there were so many love songs in the world, and love poems, and why people felt so strongly about having a partner or a passionate love-fling. I used to think romance was a collective expression of obsession or insanity. Suddenly I understood that it can be so much more than that.

When my relationship came to a close, I decided to create Lesbihonest Podcast to share my own experiences and those of other lesbians. My first episode was called “How to Survive a Lesbian Breakup,” which thankfully I did, and since then I have traveled to France, scotland, ireland, Czech Republic, hungary, Poland and Spain talking to other women about lesbian rights, culture and visibility in their countries. 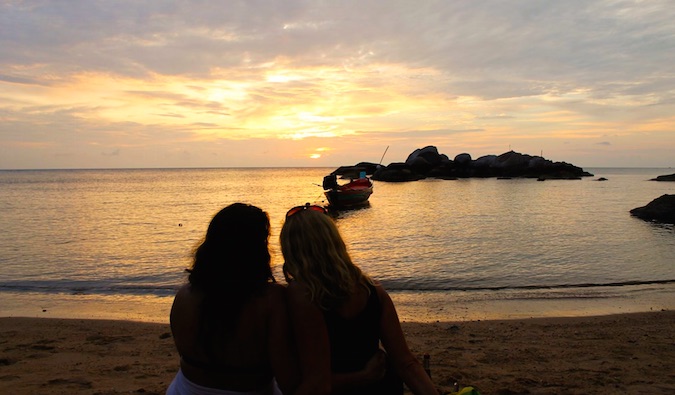 The queer scene both in the United States and in Europe has been a bit harder to navigate than I would have ever expected. As a mostly feminine-presenting woman, I’ve often been mistaken for straight even by other lesbians, and meeting other feminine-presenting lesbians to date has been a challenge. Yet I know that there are far more pressing challenges faced by the LGBTQ community, which I strive to expose and explore in my podcast.

Angela is a lesbian woman currently residing in California. Her podcast can be found at thelesbihonestproject.com.”