“They are suns which set as they rose, unobserved. Their death, when they die young, is heard by all their lovers at the same moment, for in Paris almost all the lovers of a well-known woman are friends. A few recollections are exchanged, and everybody’s life goes on as if the incident had never occurred, without so much as a tear.”

It is an impressive book, that fascinated readers and critics among generations. The main narrator starts with an almost humble apologize that he can’t tell the story in a way that he could reveal the true feelings of the characters. It is a true story, because Alexandre Dumas Fils writes of his true love which was Marie Duplessis, a true courtesan.

In few words, Marguerite is beautiful, intelligent and had a reputation of being discreet a witty lover, she had rich benefactors and was a “kept woman”, a courtesan of Paris The camellias were her favourite flowers and their color white/red were the sign of her availability. She needed love, that pure love that a clean soul of a younger man could give her. She wanted to love and give affection and parts of her soul, yet her world was ruthless, she was a courtesan, she needed much money to keep her high life standards, her friends were interested in her company for she was surrounded by rich men and she had no real friend than perhaps her maid. The world of distractions in Paris collided with the world of principles, family values and clean reputation that a educated young man like Armand had.

“Her delight in the smallest things was like that of a child. There were days when she ran in the garden, like a child of ten, after a butterfly or a dragon-fly. This courtesan who had cost more money in bouquets than would have kept a whole family in comfort, would sometimes sit on the grass for an hour, examining the simple flower whose name she bore.” 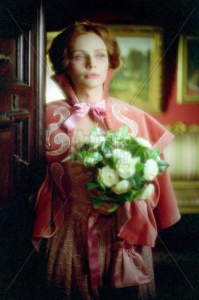 Armand is a unexperienced young man, not really wealthy, but has a pension from his grand-father, he lost his mother when he was you and and his family were his father and his sister. Perhaps what drowned him to Marguerite was the lack of his mother’s love and affection, and to have all that from the most beautiful courtesan in Paris was perhaps a part of his strong motivation.

“Oh, I would give ten years of my life to weep at her feet for an hour!”

“How many ways does the heart take, how many reasons does it invent for itself, in order to arrive at what it wants.”

The book has four narrators – the unnamed man who tells the story; Armand, Marguerite’s lover; Marguerite herself in a diary she wrote just before she died & Julie Duprat, a friend who was with Marguerite at the end. The sale attracts all fashionable Paris, especially the women who are curious to see inside the life of a scandalous courtesan. The narrator buys Marguerite’s copy of Manon Lescaut & reads the inscription inside from Armand. Armand tracks him down to buy back the book, the two men become friends & Armand tells the story of his affair with Marguerite. Before the story proper begins, there’s a truly horrifying scene at the cemetery when Armand arranges for Marguerite to be exhumed & moved to a different grave. I was shocked by the graphic description of the decomposing body. Armand naturally falls ill at the sight & has to be helped away from the graveside. It’s while he’s recovering from brain fever that he tells his new friend his story.

Armand is an innocent young man who sees Marguerite at the theatre one night & is instantly dazzled. He is introduced to her by a friend but he behaves foolishly, she laughs at him & he’s offended. He realizes that he has fallen in love but also that it’s hopeless as she is already suffering from consumption. Soon after, she falls ill & Armand visits every day for two months to enquire after her, never leaving his name. Two years pass before they meet again & they fall in love almost immediately.

“Manon died in the desert, but in the arms of the man who loved her with the whole energy of his soul, who, when she was dead dug a grave for her, and watered it with his tears, and buried his heart on it, while Marguerite a sinner like Manon, had died in a sumptuous bed (the bed of her past), but in that desert of the heart, a more barren, a vaster, a more pitiless desert than that in which Manon had found her last resting place.”

Marguerite has a rich old Duke paying her bills although she’s not his mistress & another lover as well. She is burning the candle at both ends & her health is suffering. Armand eventually convinces her of his love & his desire to look after her & they move to the country for an idyllic period. Country air, good food & healthy living restore Marguerite’s health for a time & they are blissfully happy. Armand is living in a dream though because he’s gambling to support them both. His father, after hearing rumours of his son’s new life, travels to Paris. Mr. Duval wants Armand to leave Marguerite & settle down to a career & a family. Armand refuses to leave her. Soon after though, Marguerite dismisses him with a cruel letter & resumes her old way of life. Armand is distraught & eventually decides to pay Marguerite back by starting an affair with another woman & cruelly taunting Marguerite whenever they meet. Armand eventually goes back to his family &, too restless to stay home, begins travelling. Marguerite never wanted to leave Armand, it’s her first and last true love, yet his father aroused in her  a guilty conscience for the one she loves,for not being enough for Armand, for her past life to be a mislead in his life. And Armand is way too young, to jealous and to unexperienced.  While he’s away, he hears of Marguerite’s death &, on his return to Paris, he reads the journal she had written during her illness, addressed to him & explaining her actions. Armand goes home to his family, leaving his friend, the narrator, to tell Marguerite’s story.

“Be good, be young, be true. Evil is nothing but vanity, let us have the pride of good, and above all let us never despair. Do not let us despise the woman who’s neither mother, sister, maid, nor wifw. Do not let us limit esteem to the family nor indulgence to egoism. Since there is more joy in heaven over one sinner that repenteth  that over ninety nine just persons that need no repentance.”

“I gave myself to you sooner than I ever did to any man, I swear to you; and do you know why? Because when you saw me spitting blood you took my hand; because you wept; because you are the only human being who has ever pitied me. I am going to say a mad thing to you: I once had a little dog who looked at me with a sad look when I coughed; that is the only creature I ever loved. When he died I cried more than when my mother died. It is true that for twelve years of her life she used to beat me. Well, I loved you all at once, as much as my dog. If men knew what they can have for a tear, they would be better loved and we should be less ruinous to them.”

I recommand , a must see movie :  Camille by George Cukor with Greta Garbo and Robert Taylor from 1936. It quite influenced me to read the book. It contains remarkable interpretations, especially the love , the tragic and the mockery scenes. Unlike the book, where Marguerite dies with the longing of never seeing Armand, in the movie, Armand arrives at Marguerite’s place before she dies, for a last embrace, a last kiss, a last look…

“The soul is but the vestal charged to feed the sacred fire of love.”

“We are not allowed to have hearts, under penalty of being hooted down.”

I recommand , a must see movie :  Camille by George Cukor with Greta Garbo and Robert Taylor from 1936. It quite influenced me to read the book. It contains remarkable interpretations, especially the love , the tragic and the mockery scenes. Unlike the book, where Marguerite dies with the longing of never seeing Armand, in the movie, Armand arrives at Marguerite’s place before she dies, for a last embrace, a last kiss, a last look…

“The soul is but the vestal charged to feed the sacred fire of love.