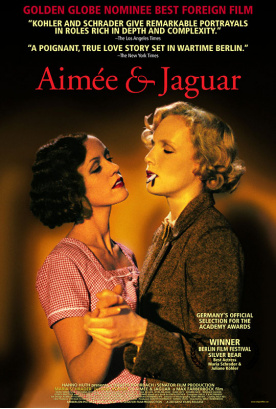 A true love story between two women during the World War II in Nazi Germany : Lilly is German and Felice is Jewish. The story of Aimée and Jaguar can be read on multiple levels. Indeed, it comes to us already in two incarnations : the clash between their genes and heritage and their love for each other. Felice knows she can’t tell Lilly she’s a Jew, so there’s comes the drama, because Lilly didn’t know what love was and the nationalism in Germany of that period made women just recipients for growing the higher race, character, freedom or education lacked. Women couldn’t have nor find jobs and Felice had to hide her Jewish heritage while helping the resistance. She had a change to go to America to her uncle, but for Lilly she chose not too. Their devotion to each other during such harsh time is admirable and tragic.

Elisabeth (Lilly) Wust is a mother of four, married to a Nazi soldier fighting on the front. While her husband is away, she has affairs with various other high-power members of the National Socialist party. Through her domestic assistant, Inge Wolf, she meets Felice, and they fall in love. Felice comes to live with Lilly, and from then on her home is filled with various lesbian and bisexual women and occasional male friends. Felice is working at the local newspaper and in secret helps the resistance. She’s a free spirit in spite of her fear of being deported and a woman that loves women.

A passionate love affair begins amidst the bombing raids and the threat of persecution. Madly in love, Lilly wants to divorce her husband, which causes a terrible storm, not just because her lover is a woman, but because she is Jewish and fighting for the Resistance. But nothing stops the love-blind Lilly. The two women make a pact of love and marriage and try to block out the reality of war and persecution; however, the Gestapo soon catches up with them. Eventually Felice discloses to Lilly that she is Jewish. Lilly is amazed that Felice can love her despite Lilly’s history of anti-Semitic remarks. Shortly after they declare their mutual love and exchange rings, Felice is discovered by the Gestapo and sent to a Jewish collection center in the city. Lilly visits her there daily until Felice is sent to a labor camp. When Lilly tries to visit her at the labor camp as well, Felice is sent to a concentration camp. What happens to Felice after that is unclear, but she is not heard from again. In 1948, the municipal court of Berlin-Charlottenburg declares her legally dead as of December 31, 1944.

While their love for women may have made some of them vulnerable, lesbianism was not illegal and therefore not defined as a category in the concentration camp system of crimes. Lesbians did not wear the pink triangle, as gay men did; instead they wore triangles that designated them as “asocial” or as “political” prisoners. Because “Nazi ideology saw the ‘Aryan’ woman as predestined to motherhood and marriage as a matter of principle,” Nazis regarded lesbians as women who were not fulfilling their biological destiny and as women in need of intercourse. Generally, women were commodified and lesbians were victimized as a result of pernicious Nazi misogyny.

In the end the Nazi regime failed, a high percent of men died during the war and the women remained to rebuilt Germany and Austria with help of Plan Marshall of US.